Posted on October 19, 2017 by Language of Commerce 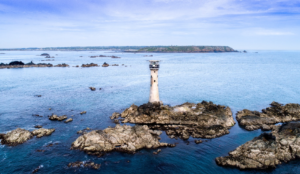 “Of every one hundred men in battle, ten should not even be there. Eighty are nothing more than sheep. Nine are the real fighters, we are lucky to have them since they make the battle. Ah, but the one—one is the Warrior—and he brings the others home.” (Heraclitus – 500BC)

There is so much to learn from the lives of heroes as we glean from what made them standout and rise above the rest.

The story of Grace Darling is one of courage and selflessness. Grace was the daughter of a lighthouse keeper. At the age of 22, she still lived with her family in a lighthouse on Longstone Island, among the England Fame Islands of Northumberland.

Her father, William Darling, was to make sure that the lamp in the lighthouse remained lit to warn passing ships of the treacherous coast line. In the early hours of 7 September 1838, Grace looked out of her bedroom window and saw the shipwreck of SS Forfarshire on a nearby low rocky island. The survivors were clinging to the rocks and struggling to hold on in the midst of turbulent waves.

Waking her father, they launched their small rowing boat into choppy seas, rowing for about a mile around rocks to reach the survivors. They managed to rescue 4 men and a woman off the rocks. They rowed the survivors back to safety where Grace took care of them. William and a survivor headed out once more into the treacherous waters bring home four additional survivors.

The storm abated after 3 days and only then were they able to return to the mainland. Grace (as she is so aptly named) was declared a hero among the people because of her “bravery and simple virtue”, she received many awards for her bravery, including a cash gift from Queen Victoria.

But what about Us?

If we think of the heroic stories, like Grace, they are usually just normal people who were at the right place at the right time and who’s compassion took control of the situation. Most times our perception of ourselves debilitate us, leaving us feeling inadequate and of little to no worth.

God uses the ‘average people’ of the world – like Grace and like each one of us – to do great and mighty things. In Judges 6:15, we read of Gideon, who described himself as follows: “my clan is the weakest in Manasseh and I am in the least in my father’s house.” If we watch the story of Gideon unfold, we see God using him mightily despite his insecurities and fears.

So, God clearly uses the seemingly ‘foolish things’ of the world to do unimaginable things. Indeed, His strategy and ways are not always the most logical or reasonable in our eyes. But, if you believe, God can and indeed He wants to give us strategies to solve problems which go against human reason. Think again of Gideon – God asked Gideon to remove most of his huge army and go into battle with just 300 men – reduced from 22,000. God gave Gideon a strategy for victory against another army and this strategy was successful. They won!

Trust in God today, He will use the ‘ordinary you’ to achieve extraordinary things! Be a hero in your family and in your organization. Trust in Him for strategies that go against all human understanding. Trust Him for His wisdom and vision to see what needs to be done in difficult situations. Trust God’s solutions, even when it does not seem reasonable or logical to you.

To experience God’s ways, its firstly important not question His ways. We only see snippets of the big picture, it is a grand mosaic, and must be seen as an unbroken circle. Be careful not to negatively judge a dark trial, it may be dark, but that darkness will minister to the light, even as the ebony gloom of midnight makes the stars appear more sparkly in the sky.