Learning to Fly in your Business | Alan Louis - Language of Commerce

Learning to Fly in your Business

Posted on September 5, 2016 by Language of Commerce 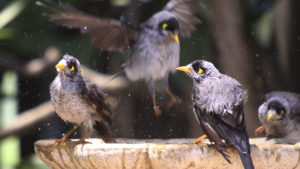 “He who would learn to fly one day must first learn to stand and walk and run and climb and dance; one cannot fly into flying.” (Friedrich Nietzsche)

Sam Walton (1918-1992) was a businessman and entrepreneur who is famous for having started the global retailer Walmart and Sam’s Club. Mr Walton started out as a trainee in a variety store and eventually bought his own store at the age of 26. He grew the Walmart chain step by step.

Today, there are 11,529 stores in 28 countries. They employ over 2.2 million staff. One key element of Mr Walton’s success in leading Walmart was his passion to keep learning about the business of retail stores. He would use every opportunity to run Walmart better and was on a continual journey of learning about his field.

The story is told about Mr Walton who, as one of ten retail store owners, was approached by a Brazilian businessmen in 1986. The Brazilians were asking to visit to see how these companies ran their retail operations. Most did not bother to reply or said no. Mr Walton said yes.

As the Brazilians stepped off the plane in the US, they were met by Mr Walton. As he took them around his stores, he bombarded them with questions about Brazil and the Brazilian market. It soon dawned on them that Mr Walton had invited them to the US so that he could learn about South America.

A while later, Mr Walton headed to Brazil to visit his new friends. One afternoon, a Brazilian businessman received a call from the police. They had arrested Mr Walton as the store staff in the Sao Paulo store were worried about an old man who they found crawling around the floors of their stores, measuring the width of the aisles. Mr Walton, founder of one of the largest retailers in the world, was willing to do whatever it took to learn more about his field.

Your mind looks into the past by memory and into the future through vision. Godly vision gives you focus and focus gives you direction. Sometimes vain imaginations block godly vision.

From my experience, people seem to drift into vain imaginations rather than seeing all things possible. Everyone must learn to identify discouraging imaginations, cast them down, and focus on the future.  A wise man will access that by his wisdom which a strong man cannot effect by force of arms.

What are you Prepared to Do?

Are you willing to dig deep to learn about your field? Are you making an effort to learn? What questions are you asking to grasp a deeper understanding of your field? If you do want to become a leader in your field, you need to be on a continual journey of learning.

Albert Einstein said that: “It is not that I’m so smart. But I stay with the questions much longer.” We need to keep asking the difficult questions to keep learning and to keep growing.

In Proverbs 1:5 it says, “Let the wise hear and increase in learning, and the one who understands obtain guidance” and furthermore in Proverbs 18:25,  “An intelligent heart acquires knowledge, and the ear of the wise seeks knowledge.”

Indeed, the Bible is a story of God’s dealings with His people and how He challenges them to learn and grow. God gives us wisdom if we ask for it.  Ask God today for His wisdom and for understanding in your field. Keep challenging yourself to grow, but do so in this sequential order – walk, run, dance and only then fly!