Be Courageous to Defend your Business | Alan Louis - Language of Commerce

Be Courageous to Defend your Business 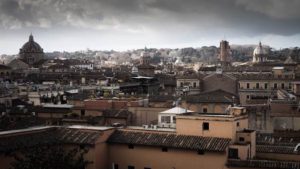 In 509 BC there was a battle for the Italian city of Rome. The Etruscan army were attacking the city and faced off against the defenders of Rome on the banks of the Tiber river. The story is told that the Romans, seeing their two key commanders wounded during the course of this battle, started to panic.

The enemy pushed and shoved their way across the bridge crossing the Tiber leading into Rome. They killed numerous Roman defenders around the bridge and it soon looked apparent that they would start to cross the bridge into the city. Perceiving the danger, three officers stood shoulder to shoulder to allow their own troops to pass by thereby preventing the enemy from crossing.

These three soldiers were Spurius Lartius, Titus Herminius Aquilinus and Publius Horatius. Records of this battle describe how these three withstood sword and missile attacks until the Roman troops had all crossed. Lartius and Aquilinus had received such severe wounds that they themselves were forced to retreat across the bridge. They called on Horatius to retreat as well, but he realized the tactical disadvantage of allowing the enemy to cross the bridge. He shouted to the retreating troops and told them to break up the bridge.

Horatius single-handedly faced the enemy onslaught surrounded by a pile of slain warriors until the bridge behind him was torn apart. Finally, having been wounded all over and having received a spear in the buttocks, he heard a shout from the other bank that the bridge was dismantled. He then ran back along the bridge and jumped into the river, swimming frantically across the river to safety. Horatius was an obvious hero and honoured by Rome for this courageous act.

Although we generally don’t face an armed enemy like Horatius did, we each face battles that do threaten to overwhelm us. We have the choice in these battles to stand firmly and face the battles around us or to flee. In the marketplace we will encounter challenges that seem overwhelming in their intensity.

You will most likely face a time in your business where from all sides the hell-hounds will bark furiously. Do not be deceived that your present false confidence (in your past success or your friendships) will support you in the dread day of adversity. A cordon of devils will hem you in and every way of escape will be closed up, making you feel like a hunted stag. Satan knows very well how to blockade your business coasts with his iron warships.

It is in the midst of these battles where we need to decide whether we will continue to fight to defend the dream, to build the company and work to overcome. The biggest victories often require the biggest battles. Are you willing, like Horatius, to stand on the bridge of your organisation? I would challenge you to keep standing, because there is a port of safety that God will open up to you – if only you will believe.

Paul did not give up doing what God had called him to do, despite immense challenges, and was rewarded by writing the majority of the New Testament.

But I’m Neither Horatius nor Paul!

We may not have the courage of Horatius or Paul, but it’s worth noting that the most powerful virtue in the Christian life is not courage but faith that perseveres through darkness and pain, refusing to relax its hold on God.

Faith and courage must rest on your understanding of God – place no confidence in your own abilities. We find this illustrated in King David’s life when he was often at his wits’ end, but he was never at the end of his faith. Faith must be exercised, or the preciousness of God is not truly known, and God must always be the object of faith.