Keep on Walking in Business | Alan Louis - Language of Commerce

Keep on Walking in Business 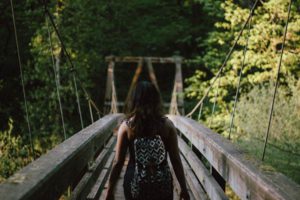 The American President, Franklin Roosevelt, famously said: “The only thing we have to fear is fear itself.”  We live in a global environment where fear is lurking around every corner, looking for a place to roar. If we listen to the news, it is easy to allow fear to take root. What about global terrorism? What will happen with our national leaders? What about the weak global economy? What about the future?

All of these fears have the capacity to cripple us. We are tempted to retreat to a quiet and safe place where no risk taking is required – to not move forward. The theologian Charles Stanley commented that fear stifles our thinking and actions. Fear creates paralysis. Fear causes us to stand still.

Mark Burnett is an example of someone who kept on walking against all the odds. He served for a period in the British military and then found himself unemployed. He was desperate for a job and then started selling t-shirts. Within a short time he had made enough money to buy a home. His finances then accumulated to allow him to buy the rights for a British reality television programme called ‘Survivor’.

With no knowledge or experience in television, he could have let fear and insecurity hold him back and keep him in the t-shirt business. Instead, he went beyond his fear and began pitching his Survivor series to US television networks. After being rejected by several networks, his idea was accepted by CBS. Survivor went on to become a multi-series success, as did Mark’s other shows such as The Voice, Shark Tank and the Apprentice.

Mark once commented, “In the end you are never going to be certain that you are on the right path … You just have to listen to the call and trust that it will all work out. The path isn’t clearly laid out. You’ll be guided, but if you don’t start walking, you won’t get anywhere. Start walking, even if you don’t know where the path will lead.” Mark stepped out in faith and moved forward. He kept on walking.

As business people, facing significant hurdles and difficult decisions, it might seem wise to exercise extreme caution and in essence let fear guide us. As a Christian, I follow the biblical pattern when fear lurks its ugly head – which is this – the knowledge and certainty that God is Sovereign over the affairs of life.

This in essence means that no circumstance can ever touch the God-believing person until it has first gone past God before it gets to the individual. If it has come that far, it has come with purpose, which you may not understand at that moment, but its evidence that you need not succumb to fear. In my case, I lift up my eyes to Him and accept the trial as coming from the throne of God for some purpose of blessing to my own heart, or to the blessing of others – so no sorrow should ever disarm us.

I know that my faith as a Christian is built on solid ground, so as long as I am listening to God’s voice in this journey at every turn, I need not live in fear. Many biblical verses point to this fact, such as Isaiah 43:1, “But now thus says the Lord, he who created you, O Jacob, he who formed you, O Israel: ‘Fear not, for I have redeemed you; I have called you by name, you are mine.’”

How do I Trust?

You may ask, “but how do I go about trusting God?” There is no one single answer to this, but I attempt to answer from my own experience. Trusting God is first a matter of knowledge (being exposed to the knowledge of the truth tells me that God is sovereign and loving) and secondly a matter of the will and only passing through these two gateways do the appropriate feelings follow.

Fear will always try to paralyse because its aim is to perplex one with imaginary troubles. It elevates things worse than they are, and then afflicts more than is needed. But, thank goodness, faith will always encourage one to keep on walking.

This entry was posted in Business, Faith, Success. Bookmark the permalink.