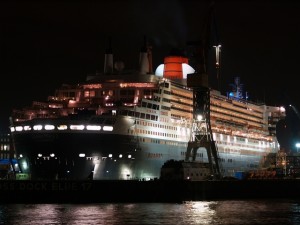 In 2013, Mylene Paquette, a Canadian sailor set off for a journey of a life-time. She had decided to row across the Atlantic Ocean on her own from Canada to France. The distance she was going to row was 2,700 nautical miles (5,000 kilometres). About halfway on her journey, she was hit by devastating storms.

Her boat capsized 10 times as she battled against the waves and wind. During these storms she lost her satellite phone, her anchor and a range of crucial items and found herself in a precarious situation. She radioed her predicament to her support team but sitting along in the middle of the ocean saw little hope of rescue. She was in urgent need of help and needed a miracle fast.

After hearing from her team that help was going to be very difficult, she fell on her knees and prayed for help. Just then, she heard a voice on her radio telling her that “Help is coming from the Queen Mary 2”, one of the largest passenger ships in the world. The Queen Mary 2 was 100 miles away but the Captain, on hearing of her plight, turned the ship and headed to her rescue. Mylene watched in amazement as this huge vessel came to rescue her, a single person in the midst of the ocean. The ship’s crew dropped needed supplies, including a few luxury items, overboard for her to collect. Bolstered and motivated by this event, Mylene finished her journey safely. She had achieved the impossible, with divine help.

True to nature, the lowest ebbs go before the highest tides. God’s time to help is when things are at their worst. Providence truly verifies the paradox – the worse the better.

As business leaders, we all desire to achieve the impossible, to take our businesses to new heights and to impact our world. The best leaders ask for input and wisdom from their teams and have people who speak truth into their lives. The strongest entrepreneurs are those who realize that the journey is not about being the most knowledgeable but about being able to learn from others, and to adapt into situations.

If you as a leader need help, ask for it. Make sure that you have a trusted team of people around you who can help you and speak truth into your life and business. This sometimes means that we need to make ourselves vulnerable. Recognizing that we need help is crucial for growth.

It’s all good and well when problems can be solved humanly. But what if a miracle is required, which is often the case in business? The instruments of deliverance (such as human help) when they aim to assist, are often found to hinder. Providence sometimes directs it to be so in order that the lesson may be learnt to cease from worldly help, that we may be weaned off from a dependence upon second causes.

We must live in a constant state of reliance upon God (Psalm 62:8), for He is able to do all that for us which we trust in Him for. He is merciful in a way peculiar to Himself, he is the Father of mercies. He warns us to take heed of misplacing our confidence. Those that trust in God truly will trust in him alone.

Mylene recognized that in her own strength she could not find a solution to her problem, so she prayed and cried out to God for help. As leaders, we need to do the same, not just for miracles, but every day. Just as Mylene’s small boat was dwarfed by the Queen Mary 2, our problems are dwarfed by God’s ability and desire to help us in our time of need. We only have to ask.

Things were bad for the biblical King David before he prayed, but they were much worse for his enemies when his prayer petition was directed to heaven. David had asked for divine help and he saw the power of God released, and his enemies subsequently defeated. The renowned Baptist preacher, Charles Spurgeon, had this to say:

“A trustful heart, by enlisting divine aid, turns the tables on its enemies. If I must have an enemy let him not be a man of prayer, or he will soon get the better of me by calling in his God into the quarrel.”