Posted on September 11, 2015 by Language of Commerce 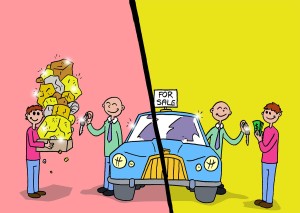 This article is written particularly for those outside the financial industry who at a glance can understand the terminology and the processes involved in the marketplace. If you are schooled in finances, then skim through this article as a review. If unschooled, then carefully read this material since it is essential for a proper understanding of the complexities and issues in dealing with the marketplace.

It is a fact that God makes the world go round, but sadly money makes human nature go round. Money is one of the key elements in an economy; without it we would be forced to barter, that is, exchange goods or services in order to pay for something.

It’s essential to know something about monetary theory in order to appreciate how money can be internationally manipulated to disengage wealth from one party to enrich another.

The two major categories of money are:

Commodity Money. This has intrinsic value like gold which can be used to make jewellery. Other types of commodity money include silver, copper, foods, or alcohol.

Fiat Money. This money has no intrinsic value. It is created when a government has decreed that notes and coins of negligible intrinsic value are legally worth a certain amount, such as dollar bills issued by the U.S. Treasury.

Banknotes were first issued in 7th century China, though it was another 1,000 years before paper money was actually issued for public use in Europe, by Sweden’s Stockholms Banco, in 1661.

It was Benjamin Franklin who said: “If you would want to know the value of money, go and try to borrow some.” In the same vain, Spike Milligan (comedian and playwright) said that “Money can’t buy friends, but you can get a better class of enemy.” There is also some truth to the statement that I once heard that “money can’t buy happiness; it can, however, rent it.”

Money (in this sense I refer to fiat money) is a token of trust. The paper notes and coins are worth only a fraction of the amount they denominate, which is why money must be backed up by people’s trust, i.e. trust that the government will ensure the money is worth something in the future.

The Problem with Materialism

If materialism is the driving motivation of your life, you will never be satisfied, no matter how much you earn or how much you acquire. Throughout the Bible, Jesus warns against the transitional nature of riches and the anxiety we suffer when we make this our focus. His caution was against the dangers of materialism and the folly of one-dimensional living which is both selfish and debasing of others.

It is not that money or possessions are wrong in themselves; it is the attitude we have towards them that is usually where the problem lies. As Oprah Winfrey aptly commented, “Everyone wants to ride with you in the limo, but what you want is someone who will take the bus with you when the limo breaks down.”

There is no doubt that the world is in financial turmoil, but even if crisis is the prevailing climate, we all have the same freedom to choose how we should respond to it. According to Franklin Roosevelt, “The test of our progress is not whether we add more to the abundance of those who have much; it is whether we provide enough for those who have too little.”

As an academic, I mastered and took an active interest in economics. Economics is not all about money, but money makes economists of us all.

Edmund Conway, economics editor of the Daily Telegraph, aptly said, “Ask someone to pay a price for something – as opposed to offering it for free, or for a favour – and you’ll flick an invisible switch inside them.”

At its heart, economics is the study of people. Conway, also says, “Economics examines what drives human beings to do what they do, and looks at how they react when faced with difficulties or successes. It investigates choices people make when given a limited set of options and how they trade them off against each other. It is a science that encompasses history, politics, psychology and, yes, the odd equation or two. If it is history’s job to tell us what mistakes we’ve made over the past, it is up to economics to work out how to do things differently next time around.”

Adam Smith, possibly the father of economics, believed that self-interest is good for society but was careful to distinguish between self-interest and pure, selfish greed. His theory was that it is in our self-interest to have a framework of laws and regulations that protect us, as consumers, from being treated unfairly.

Economics is the study of how the law of supply and demand affects human relationships. The way these two forces interact determines the value we place on goods and services. Thomas Carlyle (Essayist, satirist, historian), who called economics “the dismal science” jokingly said that if you “teach a parrot the terms ‘supply and demand’ then you’ve got an economist.”

The ideological battle underlying modern economics may best be understood in the opposing economic doctrines of John Maynard Keynes and Milton Friedman. Keynes paid more attention to unemployment than inflation, and warned that the economy could be improved by a certain amount of state interference. On the other hand, Friedman argued people should be left to their own devices with the government’s main role being to monitor and control the amount of money flowing around the economy.

Although the Smith, Keynes and Friedman economic theories have taught us much, they are not fail-safe as the economics commentator Martin Wolf (CBE – British Journalist) observed shortly before the UK and US dipped into recession: “Just as Keynes’s ideas were tested to destruction in the 1950s, 1960s and 1970s, Milton Friedman’s ideas might suffer a similar fate in the 1980s, 1990s and 2000s. All gods fail, if one believes too much.”

I spent over a decade studying economic theory and 3 decades in the marketplace, the experience was most profitable for me. However, nothing compares to the advice my mother gave me on ‘how to succeed in business’ and ‘how to succeed in life’ – taken from the Book of Proverbs (16v3): “Commit your works to the Lord, and your thoughts will be established.” Thanks Mom