The Importance of Mathematics in Commerce | Alan Louis - Language of Commerce

The Importance of Mathematics in Commerce 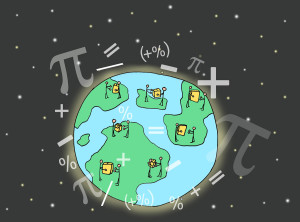 Mathematics lies at the heart of commerce as all the processes of economics depend on an understanding of the ways numbers work, how they interact with reality and how certain equations which would normally have a simple solution, are never-ending.

With an understanding of basic math principles, you will be well-positioned to understand the dilemmas Governments face and can better position yourself financially for the future. I am venturing slightly into a more complex subject, but be assured this little insight will give you deep revelation at the end, so don’t lose heart and keep on reading.

Let’s focus our attention only on the two magical numbers in math – π (Pi) and e – as they have special and irrational properties that replicate actions of people. The very imperfection of these two mathematical constants is a trait that you can use to your advantage.

I predict that we are economically heading for much more trouble ahead, so monopolies and the giant Corporate will become more prevalent in the future. The secret is that people who work for these big corporates often lack basic understanding in economics and mathematics (because of their pride, they forget the basics) so will proceed negotiating along their standard pathway while you can have the upper hand gained through flexibility, insight and intellect.

An interesting notion, albeit a bit of an aside, is the intriguing concept of π, which is a mathematical constant and is the length of the outside of a circle (the circumference) divided by the length across its center (the diameter). Its value, the ratio of these two lengths, does not depend on the size of the circle. Whether the circle is big or small, π is indeed a mathematical constant. The circle is the natural habitat for π but it occurs everywhere in mathematics, and in places not remotely connected with the circle.

We can never know the exact value of π because it is an irrational number, which means that it cannot be expressed exactly as a ratio of two integers (such as 22/7 or other fractions that are commonly used to approximate π); consequently, its decimal representation never ends and never settles into a permanent repeating pattern.

Mathematicians are continually fascinated by n, and throughout the ages many have tried to calculate its value. In 1853, William Shanks claimed a value correct to 607 places. In 1949, n was calculated to an even more remarkable 2,037 decimal places. With the help of computers, by 2002 the value of n has been computed to a staggering 1,241,100,000,000 places, which, if written down would circumvent the world nearly 62 times!

In the same way as π, the number e is another mathematical constant and is in play wherever there is a discussion of growth. Referring to any number of things, whether it be physical qualities, money or populations, growth invariably involves e.

The number e is the approximate equivalent to 2.71828, which is the base of the natural logarithm. As it approaches infinity, it is the limit of (1+1/n)n, an expression used to help explain compound interest.

The number e itself also has applications to probability theory, where it arises in a way not obviously related to exponential growth. Suppose that a gambler plays a slot machine that pays out with a probability of one in n and plays it n times. Then, for large n (such as a million) the probability that the gambler will lose every bet is (approximately) 1/e. For n = 20 it is already 1/2.72.

Like the constant π, e is irrational: it is not a ratio of integers; and it is transcendental: it is not a root of any non-zero polynomial with rational coefficients. The connections between π and e are fascinating. The values of eπ and π e are close but eπ > πe with the approximate values being eπ = 23.14069 and πe = 22.45916.

The significant reason I bring up π and e, just like the nature of humanity, is because it is not possible to fix their value.

These irrational mathematical constants cannot be fixed just as solutions to global debt and fractured government purses cannot be. It’s just not possible, and any economist or Government leader who says otherwise will have to first learn the value of π – and show us how to walk 62 times around planet earth.

All we can attempt to do is forego attempts for perfect solutions and rather focus on ingredients to make the intricate workings of commerce more palatable.

Now that’s the bad news, but there is good news not found in mathematics. Government and business leaders have been seeking solutions to complex commercial issues from mainly two sources, economics and mathematics. Sadly, they have left God out of the equation completely – no wonder we are in such a mess.

We need a miracle to solve global economic problems, and only God is in the business of miracles. But what is God seeking? The answer may be found in Matthew 5:7 “Blessed are the merciful, For they shall obtain mercy.”

Compassion is the inward principle of charity in the heart. As an example, we should show mercy and compassion towards the people living in countries like Greece (and anyone in desperate circumstances) and give according to their necessity and our ability. Once commerce starts factoring in mercy and compassion in economic theory (and of course never forgetting that God is Master of all), we may just start seeing miracles to some of our own problems.

2 Responses to The Importance of Mathematics in Commerce