It’s Foolish to Shake Hands on a Deal 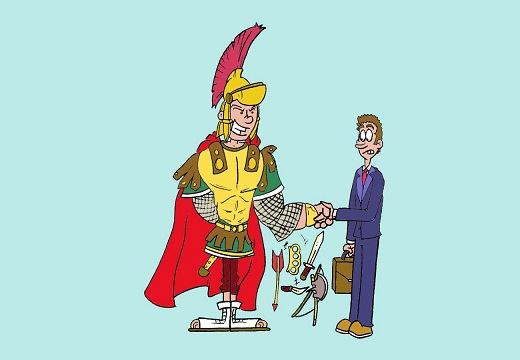 When it comes to conveying goodwill and instilling confidence, the old-fashioned handshake is often used. The gesture can reinforce positive impressions and even undo bad ones. Psychologists have found that a handshake can not only enhance the positive effect toward a favourable interaction, but it can also diminish the impact of a negative impression.

I think any reader would agree that handshakes can enhance one’s social image. Richard ‘The Old Man’ Harrison in the popular TV reality series, Pawn Stars (not the one you are thinking of), based on the famous Las Vegas pawn broker shop, shows how the old style ‘handshake’ is correctly applied and says that “handshaking is a universal type of communication which says ‘deal done’ at the end of every agreement.”

He goes on to say that “when you cut a deal, it is customary to handshake.” He however slips in something interesting (although he did not realize the significance of what he was saying at the time) in a recent interview on the handshake when he said, “Back in the Roman days the handshake was used more as a ‘signal of power’ than now.”

Unfortunately, too many people use handshakes as flattery in order to weaken your resolve, and manipulate you to believe there may be true friendship, faith and trust in the relationship.

Forces in commerce understand this hidden language and ‘signal of power’ very well and use it as a manipulative tool to disarm you. While my father is my ‘Old Man’ (sorry Dad, but you look very young), like most of the ‘Old Men’ in this world, he loved the handshake, taught it to his five sons and so we came to embrace this gesture of goodwill.

There are many good lessons to be learnt from the handshake, but I no longer embrace it. This is so because my brutal experience has shown me that in many cases over my long career, I have observed that the handshake is often contorted, changing its original, innocent gesture into a negative one, to gain competitive advantage and make you feel guilty that you somehow have not lived up to your end of the bargain.

In Roman times, the handshake was an arm clasp, with each man clasping just below the elbow of the other. This gesture provided a better opportunity to feel for daggers hidden in sleeves. Medieval knights took further precautions by adding a shake to the clasp to dislodge any hidden weapons, and thus the handshake was born.

I agree with the positive effect of a handshake on social evaluation but I strongly urge people in the marketplace to use the goodwill gesture with maximum caution and clasp your hand just below the elbow of certain individuals (you will need to make this guess for yourself) to provide you with the best opportunity to “feel for daggers hidden in sleeves.”

To seal more car deals, Chevrolet UK looked to arm its sales force with the perfect weapon of confidence: an unstoppable handshake. The challenge, intended only to be humorous for marketing purposes, set off the imagination of writer Professor Geoffrey Beattie, former Head of Psychological Sciences at the University of Manchester. After much reflection, Professor Beattie created an equation based on what he called PH – the Perfect Handshake (Article posted on io9.com by Joseph Calamia: ‘Danger! Car Dealers Now in Possession of “Perfect Handshake” Equation’, Sept 2010 – original press release from Chevy).

The variables are too numerous and complicated to list here (there are about sixty or so) but include an exhaustive list of factors such as eye contact, completeness of grip, as well as dryness and temperature of hands. Apart from the touch of fun, it serves to demonstrate that there is far more to a handshake than most people think.

There is a reason that the ‘handcuff and dagger’ skin tattoo is so commonly used. Contracts are expensive, long-winded documents that few understand and besides people generally feel handcuffed by them.

So while expensive and long-winded documents scare many people away from using written contracts, they also know deep down that the alternative ‘handshake’ doesn’t afford them the protection they really need. If you’re wearing handcuffs, there’s no doubt that the other party is in charge. So, you have been forced into a situation in which you are not comfortable and you feel restricted and resentful. On the other hand, when relying on a handshake, while you may trust the other party, there is always that nagging doubt that your recollection of what was agreed upon might not be the same as theirs, or that they may expect too much of you. Remember also that two honest people, with the absolute best of intentions, can easily misunderstand each other and disagree.

Although oral contracts (as a result of a handshake) can be as binding as written contracts, if your deal goes south as a result of an oral contract, you will start feeling like Sylvester with Tweety Bird. That’s why too many people use the ‘handshake’ technique to their advantage, because their Tweety Bird always wins in the end.

Whether you decide to use the handshake or rely on a written contract, the wise words of King David as found in Psalm 25:20-21 should be front of mind: “Keep my soul, and deliver me; let me not be ashamed, for I put my trust in You. Let integrity and uprightness preserve me, For I wait for You.”

A Thought worth pondering: If you decide to shake hands on a deal, you will look honourable for a day, but may look bad for the rest of the year.