Posted on January 24, 2018 by Language of Commerce 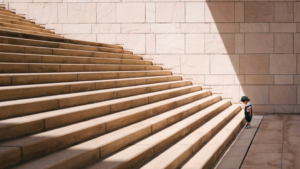 “The journey of a thousand miles begins with a single step.” (Tao Te Ching)

In fact, most of these so-called new year resolutions are nothing more than things we dream of doing, or desires that we have. They are never things that we actually resolve to do.

I generally do not make new year’s resolutions. Instead, I remain focused on the ‘now’. I live for each week, considering my key areas of focus and make decisions to optimize my efforts in moving forward. No matter what time of the year it is, I focus on the small steps, moving forward step by step to reach my goal.

Kaizen translated means ‘good change’. It is a Japanese productivity philosophy, which encourages constant, continuous improvement in every task. This work ethic momentum builds impact on the bigger picture.

Kaizen is a major reason why the Japanese business sector, like Toyota, have done so well in the last part of the twentieth century. Robert Maurer, in the book, ‘One Small Step Can Change your Life’, wrote:

“Radical change is like charging up a steep hill – you may run out of wind before you reach the crest, or the thought of all the work ahead makes you give up no sooner than you’ve begun. There is an alternative … And all it requires of you is that you place one foot in front of the other.”

In the biblical story found in 2 Kings 6, the city of Samaria was surrounded by the Syrian army. The conditions in this besieged city were extreme and rather desperate. Residents were eating dove dung, donkey’s heads and even their own children. God then miraculously used four lepers who were encamped outside the city.

The lepers were faced with a choice. Either stay where they are outside the gates of Samaria – and die! Or, go back into the besieged city – and die! Or go to the camp of the Syrian army and ask for help – and possibly die.

They decided to go ask the Syrians for food and started walking towards the Syrian army. God’s grace was with them and He worked a miracle on their behalf. The Syrians’ mistook the faint steps of the lepers and instead heard what sounded like a huge army, they fled. God used the footsteps of these four weak men, but amplified it and scared the army away.

God used the obedience of the four lepers to bring restoration of hope to the city of Samaria. Now, they could have just sat outside the city and prayed, but they had to step out in faith to see victory. What steps do you need to take? Let’s be frank now, aren’t we all like the lepers without the means to resolve the world’s problems?

Biblically, we see time and time again, God acts when we take a leap of faith. What steps do you need to take towards the army that is impeding on your goals or dreams? God is waiting for you to stand victorious, achieving what He has placed in your heart.

It is indeed true that one miracle is worth far more than ten thousand sermons. When God allows everything to go on in the standard way, and gives our thoughts, ambitions and passions their full liberty, and yet achieves His purpose, it is doubly miraculous. In the miracles performed by the lepers we see the Finger of God, but in the wonders of Providence, without miracle, we see the Hand of God.

Often faithful steady steps look small and insignificant, but like in the leper story, God can amplify these steps and do miracles on our behalf.