Posted on November 1, 2017 by Language of Commerce 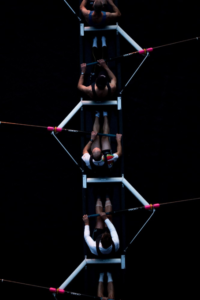 “Excellence is an art won by training and habituation. We do not act rightly because we have virtue or excellence, but we rather have those because we have acted rightly. We are what we repeatedly do. Excellence, then, is not an act but a habit.”
(Aristotle)

A friend of mine runs a charity aimed at assisting orphaned and vulnerable youths in guiding their next steps after school. Often these young people do not have the academic strengths of their peers because of trauma and learning gaps in their lives. However, despite their challenges, these young people often achieve more in their studies than their fellow peers. The reason for this is simple, they have grown up with an attitude of ‘survival of the fittest’.

Grant Cardone wrote a book entitled the 10X Rule, in which he argued that in order to achieve massive success in life, one must set goals that are 10X greater than normal and work 10X harder and longer:

“In order to get to the next level of whatever you’re doing, you must think and act in a wildly different way than you previously have been. You cannot get to the next phase of a project without a grander mind-set, more acceleration, and extra horsepower.”

The gist of his argument is that in order to stand out in our highly competitive world, one needs to work 10X harder to win over preeminent competitors. A similar principle is used within Google to facilitate constant improvement. They aim to continually make multiple improvements to any idea so that it does not just fall in the middle or be mediocre.

Likewise, Peter Thiel in his book, Zero to One, argued that entrepreneurs and business people succeed by being 10X better than their competition. Being 10X better increases one’s ability in being innovative, being prominent and becoming a force to be dealt with.

In the biblical account of Daniel, King Nebuchadnezzar (King of Babylon) besieged the city of Jerusalem and defeated it. He took a number of Israelites into captivity, including Daniel and his three friends. Daniel, not wanting to defile himself and his peers with the food and wine provided by the king, asked that he and his friends be allowed to select their own menu – vegetables and water.

Daniel made a deal with those overseeing him that after 10 days, their appearance should be compared with that of those who continued to eat the king’s food. After these 10 days, “they were better in appearance and fatter in flesh than all the youths who ate the king’s food.” (Daniel 1:15).

A while later, the king summoned for Daniel and his three friends to come to him. “And in every matter of wisdom and understanding about which the king inquired of them, he found them ‘ten times’ better than all the magicians and enchanters that were in all his kingdom” (Daniel 1:20). God had given these four young men “learning and skill in all literature and wisdom” (vs. 18). God had made them 10X better than their peers.

Proceeding Under Due Restraint

Reaching for the stars requires that we establish the right habits and practises in our lives. It is noble to work harder and be 10X fitter, but in doing so, let us place every passion and habit under due restraint, because if we are not masters of ourselves, then we are not fit to be leaders.

When achieving a level of success, we are well advised to put away all notion of self-importance. God will not bless the man/ woman who thinks himself/herself great, and we are bankrupt without God’s approval. The test is always to allow others to speak of your success, rather than to sing your own praises.