The Art of Wisely Dealing with Conflict

Posted on August 8, 2017 by Language of Commerce 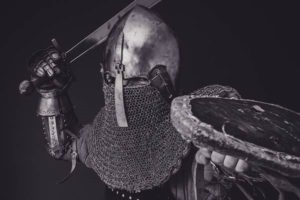 “The art of war teaches us to rely not on the likelihood of the enemy’s not coming, but on our own readiness to receive him; not on the chance of his not attacking, but rather on the fact that we have made our position unassailable.” (Sun Tzu)

Pause for a second and think about tomorrow. What do you see coming your way? What could be avoided when you face the circumstances of your business, personal life or your own emotions? It is inevitable that we will face some sort of battle. Something or someone will at any given time come up against us. There are spiteful, ill-natured people who take pleasure in toxic disputes, purposefully blowing up the sparks of contention. These people will cross our paths, drawing us into a duel.

If you read military books about people facing tremendous odds in battle, the common denominator in all of these books is the training the soldiers received. Generally, this training is both physical and mental. Soldiers are placed in situations where they need to use their physical skills learnt within some or other scenario, being physically pushed to the limit of their own endurance and strength. Mentally they are tried and tested.

Most often, the military success of a soldier is not physical strength but mental endurance. Their ability to endure “the battle of the mind” enables their bodies to cope with the physical toil of battle. As soldiers prepare for battle, they will spend more time training than being in the conflict zone. They are taught that when the lion roars, there are only 2 options – either confront wisely or run. The former option is life, the latter death.

The Weapon of Submission

As we contemplate the battles that we face, what are we doing to prepare for them? What training are we busy with? How are we preparing our bodies and minds for these battles? James 4:7-8 gives us the key ingredients for such preparation: “Submit yourselves therefore to God. Resist the devil, and he will flee from you. Draw near to God and He will draw near to you. Cleanse your hands, you sinners, and purify your hearts, you double-minded.”

What is the best remedy for the battles that we face? As a Christian, our first and best defence is to submit the situation to God. Submitting to God means to yield to Him, to obey Him, to subject one’s self to Him. This means that we make choices in our lives based on who He is and what He says rather than who we are and what we think. Essentially, submitting to God means that we exalt Jesus in every action that we take and through every word that we speak. This is our training ground, this is our preparation for the battle.

The Art of Resistance

Once we have submitted our lives to God, then we have the power in Christ to resist the devil. It has no alternative but to flee because of the authority invested in Jesus Christ. We can then face any battle because it is not us fighting the battle but God in us. The remedy to the battle in our lives is thus first to submit to God. Following this submission, we are told that when we draw near to God, He will draw near to us. God will give us the strength to keep fighting and in the end achieve victory over those things that come up against us.

When thinking about your life, meditate on this aspect of submission to God. Is your position unassailable? Are you standing on your own foundation fighting the battles of life, or are you standing on the foundation of God and His Word and allowing Him to fight these battles? Are you giving your business to God daily, or are you carrying it in your own strength and only asking God for help when it’s too late?

As a man often in battle, I spend most of my time seeking God’s Hand to act on my behalf – but that wisdom comes with age and having taken many unnecessary bullets along the way.