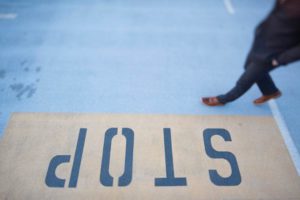 “Good Morning!” said Bilbo, and he meant it. The sun was shining, and the grass was very green. But Gandalf looked at him from under long bushy eyebrows that stuck out further than the brim of his shady hat. “What do you mean?” he said.

“Do you wish me a good morning, or mean that it is a good morning whether I want it or not; or that you feel good this morning; or that it is a morning to be good on?” “All of them at once,” said Bilbo. “And a very fine morning for a pipe of tobacco out of doors, into the bargain.” (JRR Tolkien – The Hobbit)

Like Gandalf, how often do we say words because they are the right thing to say, but without having a conversation around those words. Gandalf challenged Bilbo to go deeper with his words, to express more of who he was, to have a conversation.

For example, imagine something in your business is not going well. You know it is a problem, but you are hoping that this problem will go away with time. You are then faced with two options – wait for the inevitable confrontation to happen (you might suddenly have angry customers knocking on your door) or have the hard conversation about the problem. Similarly in a marriage, one gets a sense when things are not going well, when irritations arise too frequently and when something is brewing.

My encouragement to you is to stop – to cease allowing meaningless chatter to fill your life, to stop not going deeper and having the important conversations, to stop waiting for the inevitable axe to fall. Instead, have the conversation.

In the multitude of words sin is not lacking (Proverbs 10:19), so be careful not to be “full of words.” By a continual watchfulness over our words we will prevent an abundance of mischiefs which is the lot of an ungoverned tongue.

In Colossians 4:6 we read that: “Let your conversation be always full of grace, seasoned with salt, so that you may know how to answer everyone.” My challenge to you is to stop and ponder the things that are brewing in your life, business and relationships.

What conversations should you be having? What life should you be speaking into a situation? What challenge should you be addressing? May your ‘good mornings’ this week ring true because you have made the decision to go deeper.