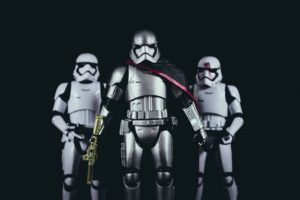 The word ‘guerrilla’ is a Spanish term which is the diminutive form of the word ‘war’ in Spanish and has been roughly translated to be ‘little war’. This term has gained popularity in recent times. Guerrilla warfare is an irregular form of warfare where a small group of combatants use military tactics including ambushes, sabotage, hit-and-run tactics and greater mobility to fight a much larger and less mobile traditional military force.

GT is all about communicating in a way that attacks in speech, but provides an escape from personal blame. For example, A asks B this question: “Are you the person responsible for making her cry?”

This question is loaded with GT. Firstly, A feels smugly righteous, assuming that only B is bad enough (as opposed to himself) to make her cry. Secondly, instead of A directly confronting B with how he really feels, he cloaks his feelings with a question (thereby providing an escape should B retort, with the ‘exit door’ reply – “but I only asked a question, I was not accusing you of anything”).

GT takes a number of shapes within our society. Gossip is a form of GT. When we speak about others in a negative way, striving to build ourselves up by breaking someone else down, this becomes a destructive force. We have become so good at talking about others rather than to them, but the negative results of these conversations echo through our organisations.  Lawrence Lovasik made the following telling statement: “It is just as cowardly to judge an absent person as it is wicked to strike a defenceless one. Only the ignorant and narrow-minded gossip, for they speak of persons instead of things.”

Unwholesome talk is another form of GT. In these conversations, often cloaked as humour, we are in effect breaking down others – this might be another people group, another gender or another person. Such unwholesome talk is an inappropriate expression of emotion and another way of making ourselves feel better and superior to others.

For self-righteous and cowardly people, GT is very appealing and natural, providing an escape from personal conflict and from taking direct responsibility. It is much easier to talk about someone than to them. I have witnessed too many business people who have perfected the art of GT, using similar tactics to guerrilla militants, with similar, devastating results in the lives of people and organisations.

How are we to Act?

What are we called to do with our speech?

In Ephesians 4:19, we are challenged to “Let no corrupting talk come out of your mouths, but only such as is good for building up, as fits the occasion, that it may give grace to those who hear.” We are called to speak in such a way that builds up, rather than breaks down. We must allow our words to be full of grace.