Stand for Values in Business | Alan Louis - Language of Commerce

Stand for Values in Business 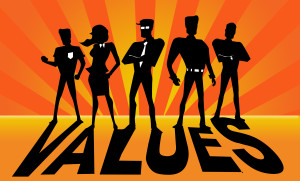 According to Sun Tzu, the renowned Chinese Military General, “(The) Commander [must] stand for the virtues of wisdom, sincerity, benevolence, courage and strictness.” We can glean a lot from the knowledge and experience of this insightful leader on the subject of values, but we need to be careful with his last point.

‘Strictness’ can safely be attributed to hypocrites, because in the end we are frail human beings and allowances need to be made for compassion and grace. The main argument in favour of values is that it attracts the blessings of God upon your life, and you sure will need His help.

Research by the Barrett Values Centre who studied 2,000 organisations across 60 countries demonstrated that “values-driven organizations are the most successful organizations on the planet.” The reasons for this are that in the private sector, values and behaviour drive culture. Culture drives employee fulfilment and employee fulfilment drives customer satisfaction. Customer satisfaction drives shareholder value and business success. As an individual and as an organisation, acting on the basis of your values ensures that you not only do not end up fighting battles that you should not be fighting, but ensures that even in the midst of the battles, you can stand and keep fighting.

I have written on the subject of ‘values’ in several posts, and don’t wish to repeat them here – Breaking Gracelessness; The Wonders of SEPA; The Grace Bankruptcy; The Name versus Numbers Systems.

While there are great forces of good in this world who strive for a values driven life, evil is sadly the dominant and prevailing force in commerce. While contemplating the subject of ‘values’, I wish to draw your attention to its adversary, namely the Illusionist.

Refuse to Believe the Illusion

Too many people who sit on high chairs and commanding positions (“the Masters”) have many fooled that their strong financial or authoritative position can prevail against good. Allow me to introduce you to the Masters’ Illusion. Rodney Buchanan (a pastor at Mulberry St. United Methodist Church, USA) aptly describes the workings of the illusionist or magician:

“Some of you may have seen David Copperfield perform his magic. His act includes a lot of glitzy conjuration, including: levitating himself, being sawn in two, and making things appear and disappear. Using illusion, he has carried the art to the extreme. He has ‘walked through’ the Great Wall of China. He has made very large objects seem to disappear: jet planes, the Orient Express and most remarkably the Statue of Liberty. Magic is really the art of illusion. It makes things appear to be what they are not — or not appear when they are. The trick of the illusionist is to use sleight-of-hand to get you to look at one thing while he is doing something else. He makes you think one thing is happening when something else is actually going on. He makes you think that what you see is real while he is hiding what is really happening. To state it briefly, what appears to be is not what is.”

Many people believe that what appears to be is actually reality rather than an illusion. Masters have us fooled that their strong financial or authoritative position can prevail against good. And when that happens, when you begin to believe that this is true, the Master has done his job. He makes things appear worse than they are. He uses discouragement to try and defeat you when you are merely trying to make a living or run your business.

The Master will whisper in your ear, “See, I am winning. I am the Master (or god) in your life and there is nothing you can do about it. You might as well pay me the fees I demand. You might as well tell me everything about you, otherwise I will give you no more.”

For years William Wilberforce had pushed Britain’s Parliament to abolish slavery. The battle was very long, however, and it looked as though nothing was ever going to change. The political powers were daunting and seemed unmovable. He was discouraged and about to give up.

But his elderly friend, the Christian Evangelist John Wesley, heard of it and, from his deathbed, called for pen and paper. With trembling hand Wesley wrote, “Unless God has raised you up for this very thing, you will be won out by the opposition of men and devils. But if God be for you, who can be against you? Are all of them stronger than God? Oh be not weary of well-doing! Go on, in the name of God and in the power of His might, till even American slavery shall vanish away before it.”

Wesley died six days later, but Wilberforce fought on for another forty-five years before he saw slavery abolished in England — just three days before his death. Wilberforce refused to believe the illusion that evil was invincible and so you too must believe that those who bully you with their power and seemingly invincible positions can be overcome.

Wisdom to Overcome the Masters’ Mindset

There is wisdom outside of the Bible, for all people are made in the image of God, and so they are able to make sense of life. But this is not to say that people have enough sense to make the most of life. Any wisdom external to God’s Word revealed in the Bible will always fall short, for it lacks eternal perspective.

There are many truths to overcoming evil, so be informed of this profound truth in Proverbs 2:6-12 “the Lord gives wisdom… When wisdom enters your heart, and knowledge is pleasant to your soul, discretion will preserve you; understanding will keep you, to deliver you from the way of evil, from the man who speaks perverse things.”

I have purposefully directed the reader’s attention away from all the attributes required to live a values driven life, to make the point that an essential part of living respectfully is also to confront and reject the Illusionist. Values takes the long look and doesn’t just focus on the fuzzy niceties but also on immediate trials and present pain, and overcoming the latter with dignity.