The Importance of Goodwill and Favour in Commerce 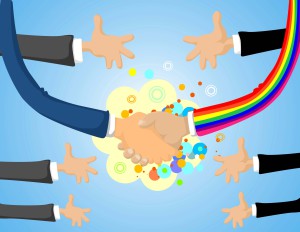 One day a young boy was misbehaving while his father was Christmas shopping. In irritation the father threatened, “If you don’t stop I’ll give all your Christmas presents to Goodwill.” The son frowned: “Who’s Will?”

The term ‘goodwill’ actually denotes an attitude of kindness, friendliness or benevolence (a disposition to do good), while business conduct is most often characterised by cold, calculating behaviour motivated by selfishness. As hard as it is to believe, the desire for profit (formerly known as the vice of greed) has recently become celebrated among business people as a virtue. Unfortunately, such an atmosphere makes it much more difficult for benevolent business people to succeed.

Ironically, this selfish profit motive is intrinsically at odds with the requirements of any moral code. If the business community is to sustain itself over the long haul, it must make an effort to bring into balance business profits and moral compassion.

With that in mind, consider the kinds of movies that are so popular today. Like most good stories, they require some kind of tension, challenge, turmoil or a ‘bad guy’ to create conflict. In fact, every good author knows he has no story without conflict. If we’re honest, we must admit that we like them because we love to see the good guys win.

However, this is the place where truth and fiction collide; it only appeals as long as it’s happening to someone else and the further removed the better. In reality, we want lives filled with peace and quiet, with little in the way of conflict, but that’s rarely the way it is apart from a massive injection of goodwill.

During the Middle Ages and the Renaissance, favours were given not just as a symbol of love but also as a display of friendship, allegiance or as a reward for duties performed and services rendered. These ‘favours’ could range from simple tokens from acquaintances to a ring given by a king.

Tokens and favours were given as payment for services that far outweighed the expectations of the giver, especially in the case of a king. For our purposes a favour can be defined as a gesture of devotion and goodwill, a promise of more to come, or just simple loyalty between friends. It may also show appreciation, as when an award is given for good deeds done.

Obviously, it’s not only impossible to acquiesce to all requests for help, but it’s also foolish. However, instead of always refusing outright, it may be possible to compromise, saying, “I can’t manage this project alone, but if you’ll do this, I’ll do that.” Matching funds are an excellent example of this kind of compromise.

When occasions arise when you must completely refuse, you might want to explain your reasons, so as not to seem rude or uncooperative. Yet unreasonable or ridiculous requests are usually best answered with a simple, ‘No’.

Many people assume that favours work as a kind of karmic bank account where, in the long term, you get out what you put in. But the reality is actually far more complex. For the most part you should not expect people to automatically return favours. If you want something, you need to ask for it. Don’t assume people will just help you out because you helped them. On the other hand, if you must resort to calling in a favour, the chances are there is something lacking in the relationship.

In the Gospel of Matthew we find a parable on goodwill. Here a man knelt before the king to beg for more time to repay the 10,000 denarii he owed, so his wife and children would not be sold into slavery to pay the debt. As a result the king was moved with compassion and forgave the servant his entire debt.

However, the ungrateful servant immediately pursued a debtor who owed him only a 100 denarii and threw him into prison, ignoring the man’s pitiful pleas for mercy. Although the unforgiving creditor had himself been forgiven a great debt, he refused to extend the same compassion to his debtor, but instead extended gracelessness. When the king heard about the man’s selfish behaviour he threw him into jail, refusing to release him until he could pay off the entire debt.

One of the most elaborate mistakes perpetrated on Western society was framed as a legitimate need for taxpayers to step in to temporarily prop up the economy, and especially ailing banks, in order to save the world from financial ruin. What the taxpayer actually ended up doing was committing to the blind support of a new and ultra-liberal financial system that exacerbates the inequality that incited the crash in the first place. Instead of lending the new cash resources to ailing businesses, the banks hoarded the cash and paid huge bonuses to the banking elite with the cash windfall. An article written in the Rolling Stone Magazine provides a good analogy of the problem:

“The result is one of those deals where one wrong decision early on blossoms into a lush nightmare of unintended consequences. We thought we were just letting a friend crash at the house for a few days; we ended up with a family of hillbillies who moved in forever, sleeping nine to a bed and building a meth lab on the front lawn.”

When we act without compassion for those around us, we leave a legacy of irreparable damage in our wake. Instead, each of us should play whatever part we can to lighten the load and loosen the yoke that enslaves others.

One Response to The Importance of Goodwill and Favour in Commerce