The Dark Triad in Commerce | Alan Louis - Language of Commerce

The Dark Triad in Commerce 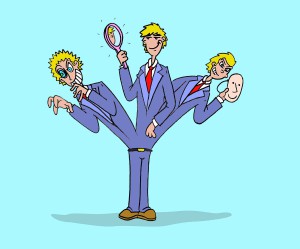 In an earlier blog, I write on the subject of ‘experiencing the psychopath’ in commerce and how I discovered the concept of the ‘Dark Triad’ after a particularly bad experience with an international bank. The Directors of this particular bank misjudged me and did not realise that I had advanced skill in finance. I recognised that they wished to introduce to our clients various investment products that were clearly immoral. The cold-blooded communications that followed rocked me to the core of my being.

The ‘Dark Triad’ is defined as a set of traits that include the impulsive, thrill-seeking and callous behaviour of psychopaths, the self-obsession of narcissism, and the deceitful and exploitative nature of machiavellianism. The Dark Triad is rapidly becoming a new focus of personality psychology.

This simply means that people who demonstrate these qualities are trying to get away with acting out against others in order to achieve their own ends. Each of the individual qualities alone can make life difficult for those in contact with those afflicted. Combined, the Dark Triad traits in a person close to you can be detrimental to your mental health and financial wellbeing.

The DDTD Scale can give you a quick way to spot the Dark Triad individual in your midst. Rate each item on a seven-point scale – it may be wise that we all rate ourselves on these qualities to see how we measure up!

The average for college students tested in the Webster and Jonason report was about 36, with most people scoring between 33 and 39, meaning that anyone scoring upwards of 45 would be considered very high on the Dark Triad total.

Wall Street’s film fictional hero (and anti-hero) Gordon Gekko has clear psychopathic tendencies. While academics believe psychopaths are responsible for a large percentage of serious crime, this does not mean they all want to eat your liver with bread and butter! Corporate psychopaths infiltrate the marketplace and look like any other senior executive and generally behave in a way that does not reveal their ulterior motives or psychopathy.

Professor Robert Hare, the world’s leading expert on psychopathy, has said that if he hadn’t looked in prisons to study psychopaths, he would have sought them out in stock exchanges. Professor Hare has repeatedly drawn attention to the possible damage that corporate psychopaths could cause in major organisations. In the wake of the banking crash, Greg Smith writes that the global banking giant Goldman Sachs “had become more like a hedge fund, concerned only with helping itself, and doing only the business that it thought would make it a lot of money and ensure its survival. Company culture and morale seemed to be bygone values. Now the firm was not willing to help clients. The firm had pulled up the drawbridge, leaving clients to fend for themselves. If you were the trader in the right place, at the right time, and knew how to capitalise on a situation, then you were promoted by the firm and paid well.”

The Rise of Corporate Psychopaths

Clive Boddy , an expert in the field of Corporate Psychopaths, agrees that the number of psychopaths in the ranks of key senior positions within modern financial corporations is rising. As he says, these individuals are able to “influence the moral climate of the whole organization and wield considerable power, having largely caused the [banking] crisis.”

Expert commentators on the rise of corporate psychopaths have also hypothesised that they are more likely to be found at the top of current organisations than at the bottom. They have further speculated that such a phenomenon will have dire consequences for the organisations as well as the societies in which they are based.

It is not difficult for these psychopaths to rise to very high levels in corporations, particularly in today’s uncertain and constantly changing corporate climates. Research shows that there are three-and-a-half times more psychopaths in senior managerial positions than there are in the general population. The managerial positions they move into exceed their abilities, but they are able to attain these positions because of the false personae they create. Corporate psychopaths masterfully fool others into believing they are talented and trustworthy, but in reality their behavior is extremely destructive.

I would appreciate if readers could provide their views as to their own experiences on this topic?