Posted on April 8, 2015 by Language of Commerce 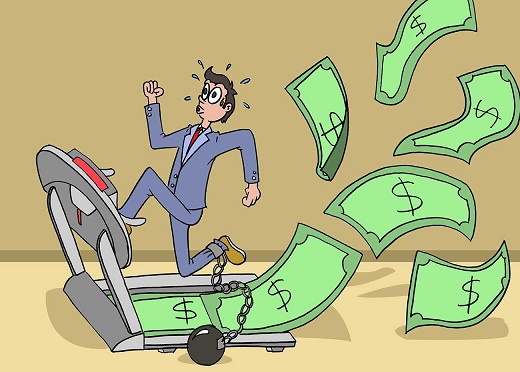 For the majority of the 7 billion people living on planet earth today, financial freedom is a long forgotten dream. In Roman times, if an individual owed money he/she was thrown in jail and a list of the debts owed were nailed on the door of his/her cell. Only when the debt was settled was the prisoner released – but of course there was nothing the prisoner could do to redeem the debt because he/she was stuck in the cell.

It is also a picture of our helplessness in the face of the debt of sin we owe to God, with the only way to pay it being death – hence the love of God in sending Jesus Christ and nailing all our sin debts to the Cross.

Experience has taught me that it takes far more than advanced academic study, many contacts or the backing of a strong balance sheet to overcome the financial titans that today hold so much of the world in modern-day slavery.

The reality is that people want to be free of financial slavery more than just about anything else they desire. By way of illustration, I think we can agree that American President Obama and First Lady Michelle both have the X Factor and know how to pull in a crowd. So imagine an occasion where President Obama is scheduled to give a major speech at the O2 Arena in London. No doubt the event would be a sell-out. They arrive on a beautiful summer’s evening with crowds lining the streets. Security is tight and the crowds are excited as they make their way to the event.

Mr Average has also scheduled his conference at the building adjacent to the O2 venue on the same evening. He arrives in a taxi with a few banners under his arm, and no supporters. As people hurry by, Mr Average starts placing his banners at strategic points along the way in full view of the standing crowds, which simply read:

“Bank Guaranteed, Interest-Free Loans to All Applicants – Tonight Only”

I am quietly confident that there would be plenty of empty seats at the Obama event, such is the XX factor power of money. All the Obama star power in the world would be easily diffused, and their crowd diverted by those ten simple words!

Perhaps more importantly, the response of the people in this story is a clear indication of their desperate desire to be free from financial debt and the slavery it brings.

Slavery is a curse that has dogged humanity for millennia. It is the ultimate degradation of the human spirit, a fundamental declaration that slaves have no inherent value as human beings. Slaves have never been valued for who they are, only for what they can do. From the time of Roman law they were classified, not as people, but as possessions, which meant they had no rights whatsoever.

Remarkably, as recently as 1857 the United States Supreme Court ruled in the case of Dred Scott vs. Stanford that Mr. Scott’s application to be freed from slavery could not be granted because African Americans were not citizens and therefore had no right to sue in Federal Court. This case has been cited as one of the catalysts that precipitated the American Civil War, which in turn reflects the level of force often necessary to free people from the bondage of slavery.

The truth is that there is something deep in the soul of every man and woman that instinctively realises they are intended to live in freedom, not in slavery. To this day, in many countries slavery still exists, where people are literally deprived of freedom against their will and forced to serve the will of others — undoubtedly the worst form of slavery is sex trafficking.

Yet the reality is that a more subtle form of slavery stalks us all because we can become enslaved by whatever we choose to serve. The most pervasive form is financial slavery, when we make money and the pursuit of riches our god in the hope that when we make enough we will have the freedom to do whatever we want.

Interestingly enough, Jesus spoke frequently about the deceitfulness of riches – not because money is inherently bad but because He knew the power it has to enslave people and to distract them from the true riches of a grace relationship with God. In Matthew 6:24, Jesus said: “No one can serve two masters; for either he will hate the one and love the other, or else he will be loyal to the one and despise the other. You cannot serve God and mammon.”

It is also important to note that it is not the amount of money that enslaves, it is the fact that its hold is sufficient to keep you on a treadmill that you seemingly cannot escape. The person who has a credit card debt because they bought things they could not afford and did not need, to impress people they did not know, is just as bound as the businessman who over-extended himself by buying machinery that is financed to the hilt by the bank.

The power of money and its hold is so great that it’s the purpose of the Language of Commerce to guide its global readership to solutions. There are no simple solutions, but we will progressively guide you to calmer waters and away from commercial forces that may ensnare you in debt and financial slavery.

2 Responses to Modern-Day Slavery in Commerce